NSK Internal clearance is one of the most important factors affecting bearing performance. The bearing “internal clearance” is the relative movement of the outer and inner rings when they are lightly pushed in opposite directions. 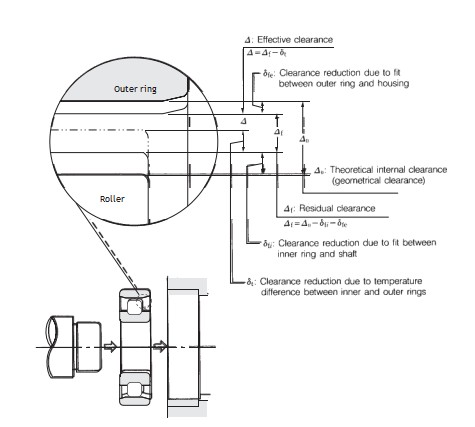 Movement in the diametrical direction is called radial clearance and that in the shaft's direction is called axial clearance.The reason why the internal clearance is so important for bearings is that it is directly related to their performance in the following respects. The amount of clearance influences the load distribution in a bearing and this can affect its life. It also influences the noise and vibration. In addition, it can influence whether the rolling elements move by rolling or sliding motion.

Normally, bearings are installed with interference for either the inner or outer ring and this leads to its expansion or contraction which causes a change in the clearance. Also, the bearing temperature reaches saturation during operation; however, the temperature of the inner ring, outer ring, and rolling elements are all different from each other, and this temperature difference changes the clearance.
Moreover, when a bearing operates under load, an elastic displacement of the inner ring, outer ring, and rolling elements also leads to a change in clearance. Because of these changes, bearing internal clearance is a very complex subject.Therefore, what is the ideal clearance? Before considering this question, let us define the following different types of clearance. The symbol for each clearance amount is shown in parentheses.

Measured Internal Clearance (D1)
This is the internal clearance measured under a specified measuring load and can be called “apparent clearance”. This clearance includes the elastic deformation (dFO) caused by the measuring load.

Theoretical Internal Clearance (D0)
This is the radial internal clearance which is the measured clearance minus the elastic deformation caused by the measuring load.

dFO is significant for ball bearings, but not for roller bearings where it is assumed to be equal to zero, and thus, D0=D1.

Residual Internal Clearance (Df)
This is the clearance left in a bearing after mounting it on a shaft and in a housing. The elastic deformation caused by the mass of the shaft, etc. is neglected. Assuming the clearance decrease caused by the ring expansion or contraction is df, then:

Effective Internal Clearance (D)
This is the bearing clearance that exists in a machine at its operating temperature except that the elastic deformation caused by load is not included. That is to say, this is the clearance when considering only the changes due to bearing fitting df and temperature difference between the inner and outer rings dt. The basic load ratings of bearings apply only when the effective clearance D=0.

Operating Clearance (DF)
This is the actual clearance when a bearing is installed and running under load. Here, the effect of elastic deformation dF is included as well as fitting and temperature. Generally, the operating clearance is not used in the calculation.